What do you get when an author who is a committed vegetarian, an innovative cook, a storyteller, and a poet sits down to write a book? You get Feasts and Fables from the Planted Kingdom, a delightful cookbook which offers practical, healthy, vegetarian recipes, accompanied by whimsical stories told by the vegetables themselves! Admit it. You always suspected that the plants were alive and engaged in running the Green realm. Inspired by these fables, you will achieve an even higher level of Green consciousness!

In this extraordinary story cookbook, the author has brought to bear her witty imagination, her love of language, and her impressive knowledge of nutrition. As the prim Mrs. Brown, a reporter “embedded” on the Green front, she takes us on fanciful forays into the world of vegetable intrigue, and then offers recipes to bring each story to a delectable end. While the stories make us smile, the recipes represent serious nourishment for body and soul. Given its rare, one-of-a-kind approach to cooking and nutrition, Feasts and Fables from the Planted Kingdom is certain to become one of your treasures.
Gloria House, Ph.D. • Detroit • 2012
—————————————————————————————————————————

What do you get when an author who is a committed vegetarian, an innovative cook, a storyteller and a poet sits down to write a book? You get a CD. Feasts and Fables from the Planted Kingdom CD, sprouted from the vegetarian gluten free story cookbook with the same name. And the story cookbook, where did it root from? Well, the seeds germinated off from the “What’s for Dinner Mrs. Brown?” popular radio segment on the Dr. James Brown Freedom From Fat Radio Broadcast (Cumulus WCK).

“I was running late, there had been a family emergency that prevented me from doing the weekly nutritional and historical research associated with the featured vegetable introduced in Mrs. Brown’s “delicious nutritious dishes.”  Up until this time, my segment had been fairly conventional, deliberately retrograde with Dr. Brown singing, a 1950s style introduction: “What’s for Dinner Mrs. Brown,” and me demurely responding, “Good tasting, delicious.” Time was running out and I went on-air in a flurry.  I conveyed my on-air fluster in a new character that spontaneously generated. I explained to the listeners, “ I sound frazzled because I had been trapped in the garden, attacked by the Onions!” People loved it; the first Fable, “Onion Revolt!” and a Mrs. Brown who could speak plant were born.  After substantial prodding from Planted Kingdom enthusiasts, I went on to record nine of the eleven Fables from the Story Cookbook  as  the recipes remain in the more accessible print story cookbook format.”

Many feel these Fables stoke a revolutionary way of thinking about plant based nutrition.  Reminiscent of  Ray Bradbury’s  personification  of animals in the American  classic “Animal Farm,”  it is fascinating  how Semaj blurs the Two- Footed and Rooted worlds., how themes of vegetable determination are colorfully  buried in the context of whimsy.  These fables could be described as “Alice in Wonderland meets the Enchanted Broccoli Forest.”  But know something deeper is at root.  Semaj sews subconscious seeds toward a vegetable consciousness which could possibly create healthy pathways that may facilitate positive behavioral change.

Here are some direct quotes regarding the Planted Kingdom Effect:

“It kind of opens up your mind in a new way about something as non-descriptive as vegetables.”   “This is theatre of the mind!”    “It’s so cute, but these themes are weighty.”    “This should be animated.”   “It’s powerful because of its beauty and poetic prose. Hey I’m a believer, how do I get to the Planted Kingdom?”  “I could listen to her voice all day.”

“This should be an animated series on PBS”    “As a teacher, I can use this with my students”    “Hey, girlfriend I’m going to throw a Planted Kingdom Party, we’re going to listen to the CD and cook that food!”

In the recording studio, Semaj was sincerely planted, assisted by the critique and robust broadcast of her husband, James Brown, MD who plays Stalk Cutright, the Planted Kingdom correspondent who announces each Fable.  Old friend and operatic singer Denise Millhollen dropped in from Portland, and laid down some amazing character vocals at the Chosen Few recording studio in Flint, MI.  You can hear Denise soaring on the dream sequence track, “Like Music, Like Squash” It was the consistent professionalism of the highly skilled and extremely talented studio engineer, Jean Lumetta who tied a marvelous creative bow, connecting sound artistry and precision.  Semaj glowed as she discussed the process:  “Every studio session was magical, inspirational… and it is that intangible joy which is conveyed throughout this CD. Jean’s talent is beyond extraordinary”

This Fabled CD is visually introduced by the masterful art of noted New artist, Art Beyond Chelsea.  Check out the cover. Say hello to Blanche Broccoli, an island reporter in the Planted Kingdom. Look closer, some suggest Art Beyond Chelsea drew a soul into the center of chlorophyll. 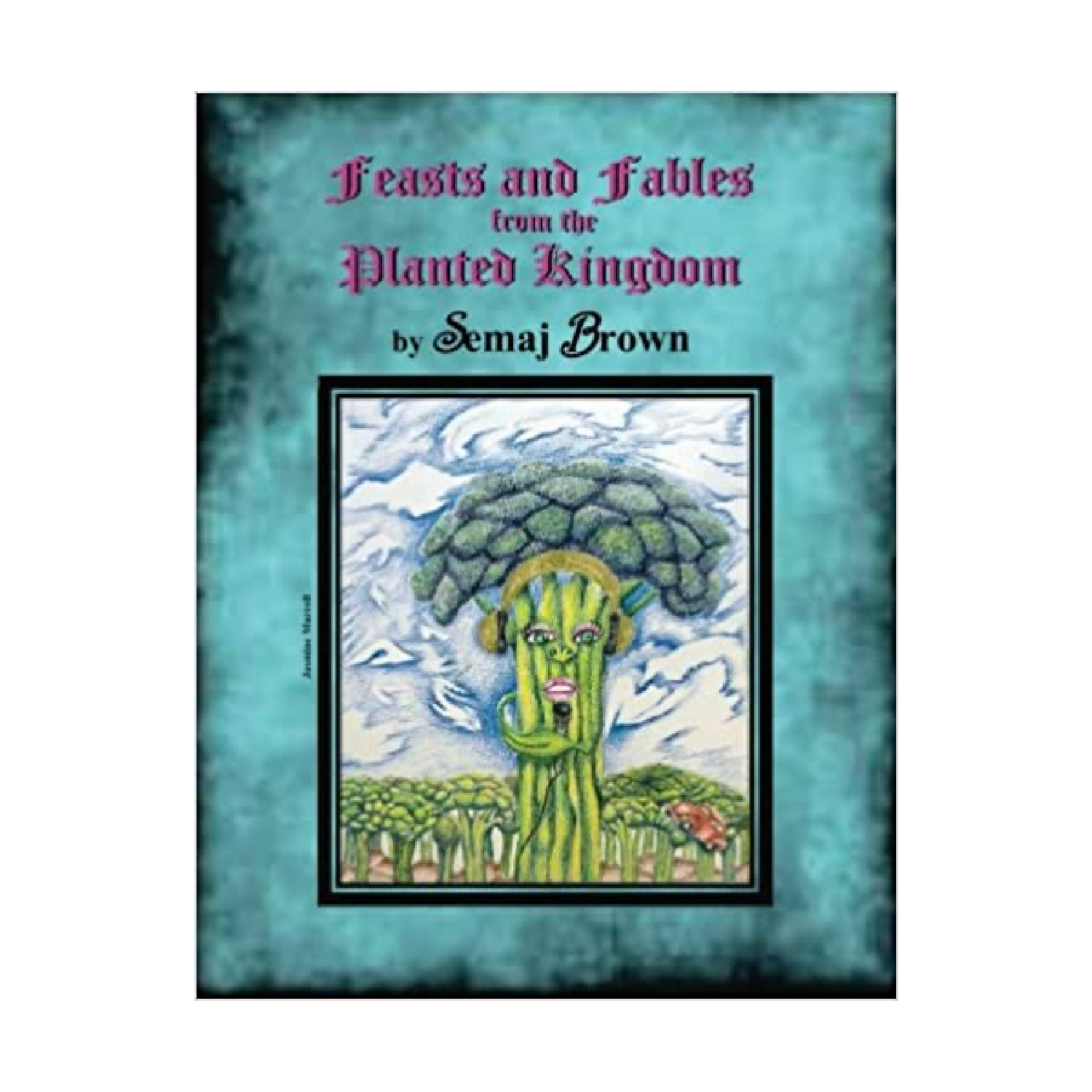 Feasts and Fables from the Planted Kingdom, a gluten free story cookbook features the prim Mrs. Brown, a reporter on the Green Front. Fanciful forays take us into the world of vegetable intrigue. While the stories make us smile there is real nutritional value offered for body and soul. The whimsical stories form an extraordinary collection that surprises and awes listeners. With music at her core, Semaj Brown has brought to bear her witty imagination, her love of language, and theatre. After listening to the album you may have to admit that you always suspected the plants to be alive and engaged in running the business of the Green Realm. Inspired by these Fables, you will never look at squash or broccoli in the same manner. See you in the Planted Kingdom! ! ! – Gloria House, PhD Purchase your copy of Feasts and Fables from The Planted Kingdom today from Amazon! Follow the Link Below

CDs available at concerts and readings only. 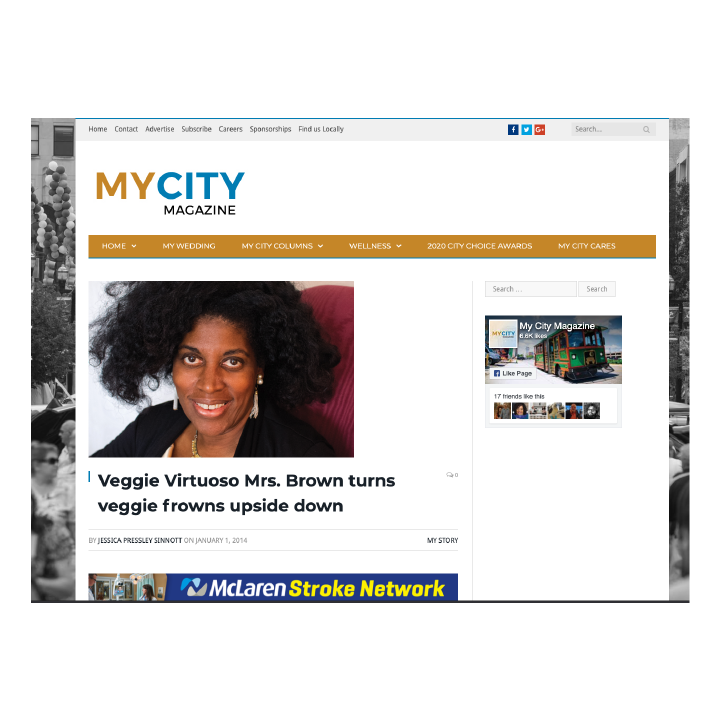