“Bleeding Fire! Tap the Eternal Spring of Regenerative Light,” (Broadside Lotus Press and Health Collectors™ LLC), is an odyssey in African American history and culture expressed through the lyrical writing of literary artist, Flint, Michigan’s First Poet Laureate, Semaj Brown. This collection of poems, and prose, interspersed with beams of science references, rise like flames from the ash and embers of Semaj’s story. Bleeding Fire is part memoir, part social commentary, and part magical realism. Readers grapple with the intensity of our collective reality while commemorating love and laughter.

Bleeding Fire is literary intersectionality where the fight for women’s justice, anti-racism movements, struggles against constructed poverty, rebellion against state violence, and climate justice collide in vivid poetic imagery. Rhymes of Applied Rights (R. O. A. R), an eleven part verse, an alternative to nursery rhymes is offered to fortify girls and women against sexual predators, and institutionalized patriarchy: “1, 2, 3, Don’t Touch Me! 4, 5, 6, None of Your Tricks! 7, 8, 9, When I Say No Don’t Cross this Line…”

Semaj’s imaginings are often explored through mythological characters, as in the section, Infernos and Inspirations. Like a dream, the spirit water figure, Mother Ocean, (Making of a New Tribe) appears on the page, guiding us from African antiquity, through the Middle Passage, and Jim Crow, on to the present Flint Water Crisis. Mother Ocean charges crimes against humanity, and crimes against crimes water. She is a creature who speaks to the resilience of African American women, “… My daughters of ocean, of rain and drizzle, of water cycle alchemy, of aqua rising from the entrails of Atlantic, ascend with the power of bubbling geyser, shooting aspirations vertical from the deep silt of sea made fertile with the blood of their people…they are reverse waterfalls standing erect…”

The layering of poems and prose provides context and texture, a buoyancy of understanding as readers float in Semaj’s fire, and bob in rhythms that intersect sorrow and joy. The poem, Wave Rock was turned into an art film short by international, New York Artist, Jasmine Murrell. Wave Rock provides a moving canvas in which to view climate change, armed conflict, as well as the violent mechanisms of environmental injustice, and its deleterious health effects on marginalized communities.

Despite the Bleeding Fire world of freedom struggles, Semaj’s work simmers with wonder, as found in the revelatory essay, Wooing the Bubble on Boston Blvd. This magical realism bubble describes a modern day Great Gatsby type home in a historic district of Detroit. In this dimension of color storms
and talking music, Semaj credits her muses, “the bygone literary sages” — Rumi, Pablo Neruda, and Khalil Gibran for, “intensifying my life, a life that was perpetually hemorrhaging, bleeding fire. They offered poetry as a gift and tourniquet.”

In the final section, Fusion, we laugh with and at Semaj in the writing, The X-Ray Light of Not Seeing. Semaj is vulnerable, bumbling, and hilarious, a breath of freshness as we swim in warmth up to the fable, The Mountain and the Steaming Monsoon, a love story about Semaj and her husband, James Brown, MD. Dr. Brown is Semaj’s creative collaborator. He is musical director for major stage productions written and directed by Semaj, including: Bleeding Fire Theatrical Poetry Production, By Ocean, By Fire, and Onion Revolt: A Healthy Comedy. 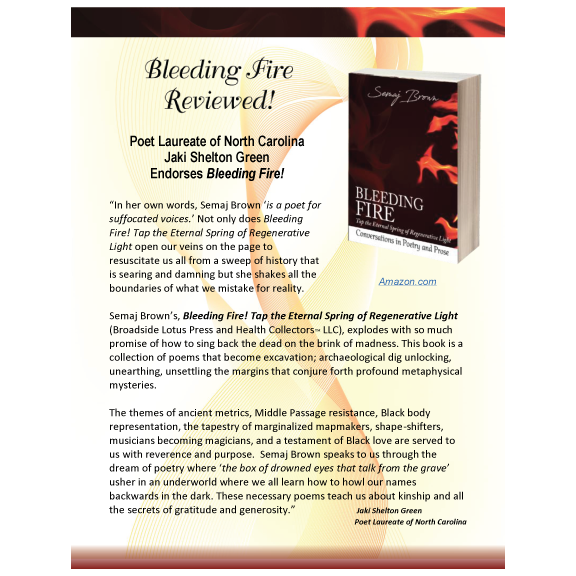 Purchase your copy of “Bleeding Fire! Tap the Eternal Spring of Regenerative Light”. Please follow the Link Below. 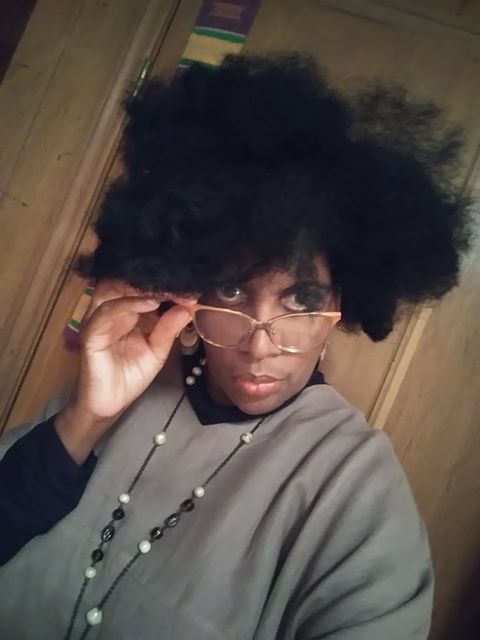